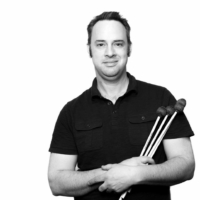 Nicola Cannizzaro is a professional percussionist living in Essex, VT. He spent the early part of his career freelancing in New York City where you could hear him in many ensembles from Broadway’s The Lion King to the New York Philharmonic. Nic, a native Burlingtonian, moved back to Vermont ten years ago with his wife and three daughters and has never looked back. Locally Nic performs with the Vermont Symphony and teaches private lessons and works with many school band programs and the Vermont Youth Orchestra, bringing classical percussion to new young players.

Asiat Ali is the String Instructor for the Essex Junction Public Schools where he teaches beginning through middle school strings and conducts the Essex High School Orchestra. A member of the Vermont Youth Orchestra Association’s artistic staff, he currently directs the Vermont Youth Strings and he served as interim conductor of the Vermont Youth Sinfonia. He has guest conducted district string orchestras in Vermont, New Hampshire, and New York. As a violinist, Asiat is a member of the Burlington Chamber Orchestra and has performed with the Vermont Symphony Orchestra, the Dartmouth Symphony Orchestra, the Vermont Philharmonic Orchestra, the University of Vermont Orchestra and the Burlington Choral Society. Asiat began his violin instruction in the third grade with Melissa Brown in the same school system where he now teaches. At the University of Vermont, he earned his Violin Performance Degree as a student of Thomas and Evelyn Read. He then continued his violin studies for two years with Phillipe Quesnel at the Conservatoire National de Region in Rouen, France.

A native of Syracuse, New York, Edward Owens has been teaching music in the Burlington School District (VT) since 2005 and is currently the band director at Hunt Middle School. Ed previously taught instrumental music at Dobbs Ferry Middle/High School (Dobbs Ferry, NY), the Ithaca School District (Ithaca, NY) and Cedar Lee Middle School (Warrenton, VA). During his tenure as instrumental music teacher in the Burlington Schools he has taught performance ensembles grades 6-12, including string orchestra, symphonic orchestra, freshman band, concert band, wind ensemble, jazz ensemble, pit orchestra, and pep band. He was voted the Burlington High School “Teacher of the Year” in 2013. Ed is a graduate of Syracuse University with a Bachelors of Music and Masters of Music in Music Education. He is an active performer, conductor and educator performing with many groups including Pine Street Jazz, the Swingin’ Vermont Big Band and Vermont Symphonic Winds. He currently resides in Essex, VT with his wife Gretchen and children Isabelle and Teddy.