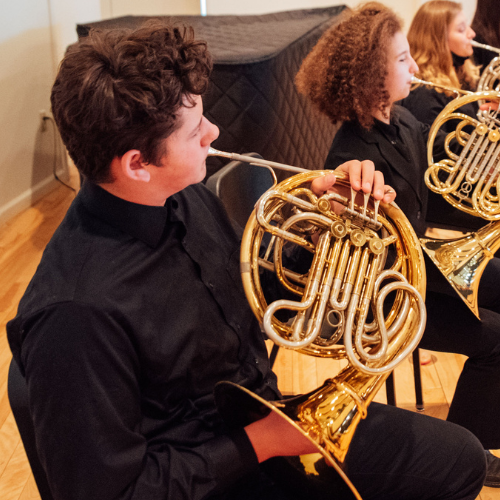 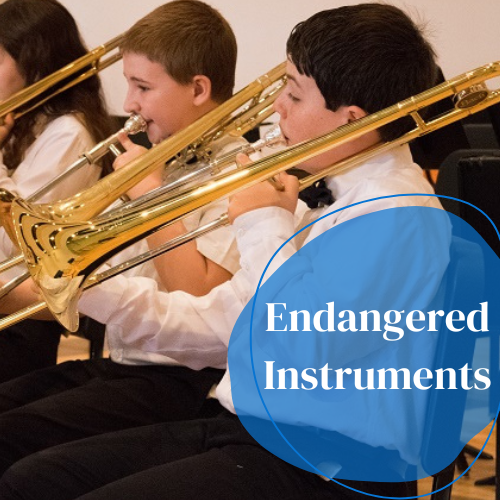 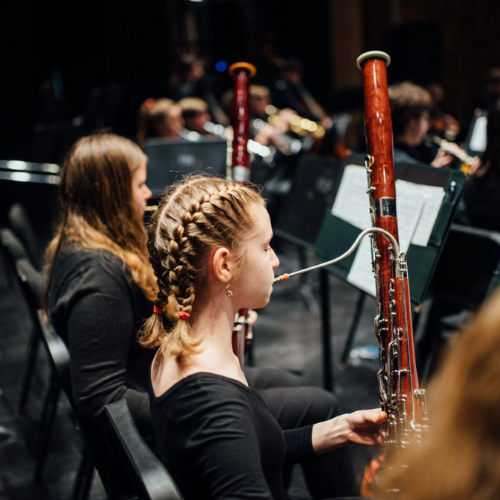 The 2022-2023 Endangered Instruments Program has openings.

Please forward all inquiries to Rosina@vyo.org

The VYOA’s Endangered Instruments Program (EIP) is a subsidized private lesson program that encourages students to play those instruments that are typically difficult to recruit for orchestras (string bass, French horn, trombone, and bassoon).  EIP is open to new students who are not taking private lessons or to VYOA students interested in playing one of these instruments in our orchestras.

Qualifying students receive 24 subsidized lessons annually (September–June) and may participate up to three years. EIP teachers will place students in 30, 45, or 60 minute lessons (only first year students are eligible for 30 minute lessons).

Student lesson fees are the following:

To maintain eligibility, students must regularly attend lessons, participate in their school music program, perform an annual check-in with the VYOA audition panel, and accept their placement in a VYOA orchestra as a result of that yearly check-in.

Bill Karstens studied horn with James Chambers at the Juilliard School in NYC, and played in many orchestras in the NYC area including Broadway shows and the NY Philharmonic. He later joined the Montreal Symphony Orchestra, founded the Canadian Brass Quintet, played in CBC radio and TV orchestras, and did commercial work and recordings. Bill taught privately and at McGill University and the University of Vermont. Many of his former students have become professional musicians in orchestras throughout the U.S., Canada, and Europe.

In a classical setting, Jesse has performed at Carnegie Hall with the New York Youth Symphony, and locally with the Cambridge Symphony Orchestra, the New England Philharmonic, the Longy School of Music Orchestra, the Concord Orchestra, and the Boston University Trombone Choir.

Jesse attended college at Montclair State University, graduating with a degree in trombone performance in 2010. He has been teaching privately since 2008. As a teacher, he worked at French Woods Festival for the Performing Arts for three intense summers. For the past ten Julys, he has taught at Friends Music Camp at Earlham College, where his duties included brass lessons, music theory classes, and directing concert band, street band, and the Symphony Orchestra.

A native Vermonter and VYO alum, Bill Tilley began playing double bass professionally at age 17 when he won an audition for the Vermont Symphony. In 1987 he graduated from the prestigious Curtis Institute of Music in Philadelphia where he studied with Roger M. Scott, former Principal Bass of the Philadelphia Orchestra. Upon graduating, he played regularly with a variety of ensembles, including the Philadelphia Orchestra, the Pennsylvania Ballet and The Opera Company of Philadelphia.

Bill is an avid chamber musician as well, playing with many local ensembles including two series for the Lake Champlain Chamber Music Festival, playing with such chamber music greats as cellists Peter Wiley, Edward Aaron and violinist / Festival Director Soovin Kim. He plays for the Vermont Symphony Orchestra, is Principal Bass of the Burlington Chamber Orchestra, and played Principal Bass for the former Vermont Mozart Festival.

A passionate teacher, Bill is the double bass coach for the Vermont Youth Orchestra and has taught many of its students privately. He is founder of the “Wahnfried Studio,” in Charlotte, VT, which offers a wide range of musical instruction from general music appreciation and basic musical reading to coaching in historically aware performance practice and musical theory. The mission of the “Wahnfried Studio” is to generate awareness and appreciation for the great traditions of the musical past and to find joy and satisfaction in hard work, which makes substantial art possible. Some of Mr. Tilley’s students have been accepted at prestigious music schools such as Manhattan School of Music, Peabody, Eastman and Hart.

Dr. Maxwell Grube is an active performer and instructor around the areas of Northern and Central New York. He currently serves as adjunct professor at the Crane School of Music in Potsdam, NY. He most recently performed with Ensemble Signal during the 2017 Lincoln Center Festival series, Ornette Coleman: Tomorrow is the Question. Maxwell currently performs as second bassoonist with the Orchestra of Northern New York and as substitute second bassoonist and contrabassoonist with Symphoria (formerly the Syracuse Symphony Orchestra). He performed as substitute principal bassoonist for the Orchestra of the Southern Finger Lakes in Corning, NY in 2014–2015, and has appeared with the Rochester Philharmonic Orchestra as substitute bassoonist on several occasions.
Maxwell was awarded the Eastman School of Music Performer’s Certificate for bassoon performance in 2014, as well as Eastman’s 2015 Teaching Assistant Prize for excellence in graduate instruction. He holds degrees from Mansfield University of Pennsylvania (BM), Arizona State University (MM), and the Eastman School of Music (DMA), where his teachers included Dr. Susan Laib, Dr. Albie Micklich, and Mr. John Hunt, respectively.
Scroll to top