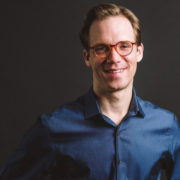 Previous experience includes positions as assistant and associate conductor for other professional orchestras such as the Cleveland Pops and National Repertory Orchestras, as well as the collegiate program at the University of Minnesota. He has also served as a faculty member at the MacPhail Center for Music, Minneapolis, Santa Fe Youth Symphony Association, and New Mexico School for the Arts.

“We are all looking forward to Benjamin’s arrival,” said Mike Noble, chair, VYOA Board of Directors. “This was a very competitive search, indicative of the amount of attention the VYOA receives from music organizations across the country. Benjamin brings a wealth of experience to the VYOA and he stood out as the unanimous choice to lead us forward. Paired with our executive director, Rosina Cannizzaro, the organization has an exciting future ahead.

“I am extremely honored to have been invited to join the VYOA as music director,” said Klemme. “The VYOA is a cultural treasure with a strong tradition of musical and educational excellence. I look forward to working with the many individuals who comprise the VYOA community in order to sustain its artistic distinction, and empower its students to achieve their potential in ways that enliven and enrich Vermont’s cultural atmosphere.”

Please join us in welcoming Dr. Klemme to the VYOA family!