We are excited to welcome a new trombone and a new bassoon instructor to replace outgoing instructors Nate Reit and Julie Wolfe. We are so grateful to Nate and Julie for their dedication to our students and would like to wish Nate all the best in his move to California and to wish Julie a happy retirement! 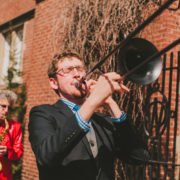 In a classical setting, Jesse has performed at Carnegie Hall with the New York Youth Symphony, and locally with the Cambridge Symphony Orchestra, the New England Philharmonic, the Longy School of Music Orchestra, the Concord Orchestra, and the Boston University Trombone Choir.

Jesse attended college at Montclair State University, graduating with a degree in trombone performance in 2010. He has been teaching privately since 2008. As a teacher, he worked at French Woods Festival for the Performing Arts for three intense summers. For the past ten Julys, he has taught at Friends Music Camp at Earlham College, where his duties included brass lessons, music theory classes, and directing concert band, street band, and the Symphony Orchestra.

Now living in Burlington, Vermont, Jesse and his partner strive to bring their young daughters up in the most musical household possible. 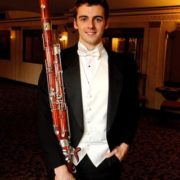 DR. MAXWELL GRUBE is an active bassoon performer and instructor around the areas of Northern and Central New York. He currently serves as adjunct instructor at the Crane School of Music in Potsdam, NY. He most recently performed with Ensemble Signal during the 2017 Lincoln Center Festival series, Ornette Coleman: Tomorrow is the Question. Maxwell currently performs as second bassoonist with the Orchestra of Northern New York and as substitute second bassoonist and contrabassoonist with Symphoria (formerly the Syracuse Symphony Orchestra). He performed as substitute principal bassoonist for the Orchestra of the Southern Finger Lakes in Corning, NY in 2014–2015, and has appeared with the Rochester Philharmonic Orchestra as substitute bassoonist on several occasions. Maxwell was awarded the Eastman School of Music Performer’s Certificate for bassoon performance in 2014, as well as Eastman’s 2015 Teaching Assistant Prize for excellence in graduate instruction. He holds degrees from Mansfield University of Pennsylvania (BM), Arizona State University (MM), and the Eastman School of Music (DMA), where his teachers included Dr. Susan Laib, Dr. Albie Micklich, and Mr. John Hunt, respectively.

Maxwell is the owner of Basso Vento bassoon reeds, and he is an active researcher of bassoon repertoire. He edited a new edition of Edouard Du Puy’s Quintet in A Minor for Bassoon and Strings, published through TrevCo-Varner Music, which serves as the work’s first full-score, critical edition. Maxwell’s enthusiasm for the International Double Reed Society (IDRS), is due in part to his role as Administrative Assistant of the 2012 Arizona State University Conference in Tempe, AZ and the performances with his bassoon quartet, BassooNova, at the 2012 and 2013 IDRS Conferences. He advocates strongly for commissioning new works for solo and chamber bassoon works, through consortium projects and developing composer-performer collaboration projects. Maxwell looks forward to upcoming research and publication endeavors, which focus on the history and future of bassoon literature.